Vintage Space Toys: Around the World and into Orbit

While Buck Rogers and Flash Gordon had captivated their parents’ generation in the 1930s, children of the 1950s saw a renewed fascination with space travel, accentuated by sci-fi films and TV shows such as “Captain Video”, “Space Patrol” “Tom Corbett, Space Cadet” and many others.

Of course, it wasn’t only fictional space adventurers in film and television that inspired this intergalactic interest – the increasingly real possibility of actual human space travel was looming in the not-so-distant future.  1955 marked the beginning of the “Space Race” between the USA and USSR, in competition for superior spaceflight technology. By 1957 the USSR had launched the first manmade satellite (Sputnik) into orbit, and by 1961 they had sent the first human (Yuri Gagarin) into orbital flight. The outer space obsession intensified as the USA raced to compete with the USSR’s successes, culminating with the Moon Landing in 1969.

For a long time, the cosmos has captivated our imaginations and has had spiritual significance for humans – many look to the stars for divine meaning and guidance. Since the scientific revolution of the 16th and 17th centuries, the emergence of science fiction as a literary genre in the 19th century, and the rapid acceleration of space exploration technology and astrophysics in the 20th-21st centuries, outer space has taken on new, varied and multi-layered meanings for a lot of people: for the adventurous types, it can embody excitement, danger, glory and exploration; for the intellectually-inclined, it promises scientific discovery, challenge, achievement and wonder; for the the philosophical, it may portend uncertainly, instability, revolution and dystopian possibilities; and for the artists and creatives, it can inspire through it’s beauty and vastness.

Toys have always been manifestations of the politics, technology, and ideologies a particular era; the fabulous space toys that proliferated during the mid-20th century are testament to the importance that these cultural moments held for everyday people, not just scientists and fiction writers.

Japan was a major exporter of tin-litho toys by this time, and was also at the vanguard of battery-usage in toys. Fantastical designs, strange sounds and blinking lights were perfectly fitting for sci-fi toys, so the Japanese toy industry was well-situated to supply the demand for these playthings.  We have some Japanese space toy examples in the collection here, by manufacturers such as Daiya, Tokyo Plaything Shokai, Yonezawa, and Masudaya. Germany also produced a number of beautiful tin-litho space toys during the late ’40s and into the ’50s and ’60s, by manufacturers such as Technofix  and Blomer & Schuler. Both tin-litho and plastic space toys were also produced in many other countries around the world: we have examples from the UK, Italy, Argentina, Hong Kong, and the USA.

The use of various types of plastics for the manufacture of toys was gradually on the rise in the 1930s and 40s. Advancements in injection molding technology during WWII and the development of new types of plastics lead to a boom in plastic toy production during the late 1940s into the 1950s, especially in the USA.

The first plastic space people were produced by Archer Plastics of New York circa 1952, which came in assorted metallic colors with removable clear helmets. The first plastic spaceships may have been manufactured as early as 1948, when an advertisement for a “Thunderbolt Rocket Car” by California Molders Inc. appeared in a Monsanto Chemical Company publication of that year.  According to plastics expert Bill Hanlon, however, it is widely agreed by many collectors that Pyro Plastics Corp produced the most desirable plastic spaceships during this period. Many other manufacturers such as Marx, Premier Products, Ajax, Gilmark, Irwin, Ideal, Lido, Plasticraft and others followed suit, producing an array of fantastically detailed spacemen, aliens, spaceships, space cars, rockets, and ray guns. Check out the variety of vintage plastic space toys available in our shop! 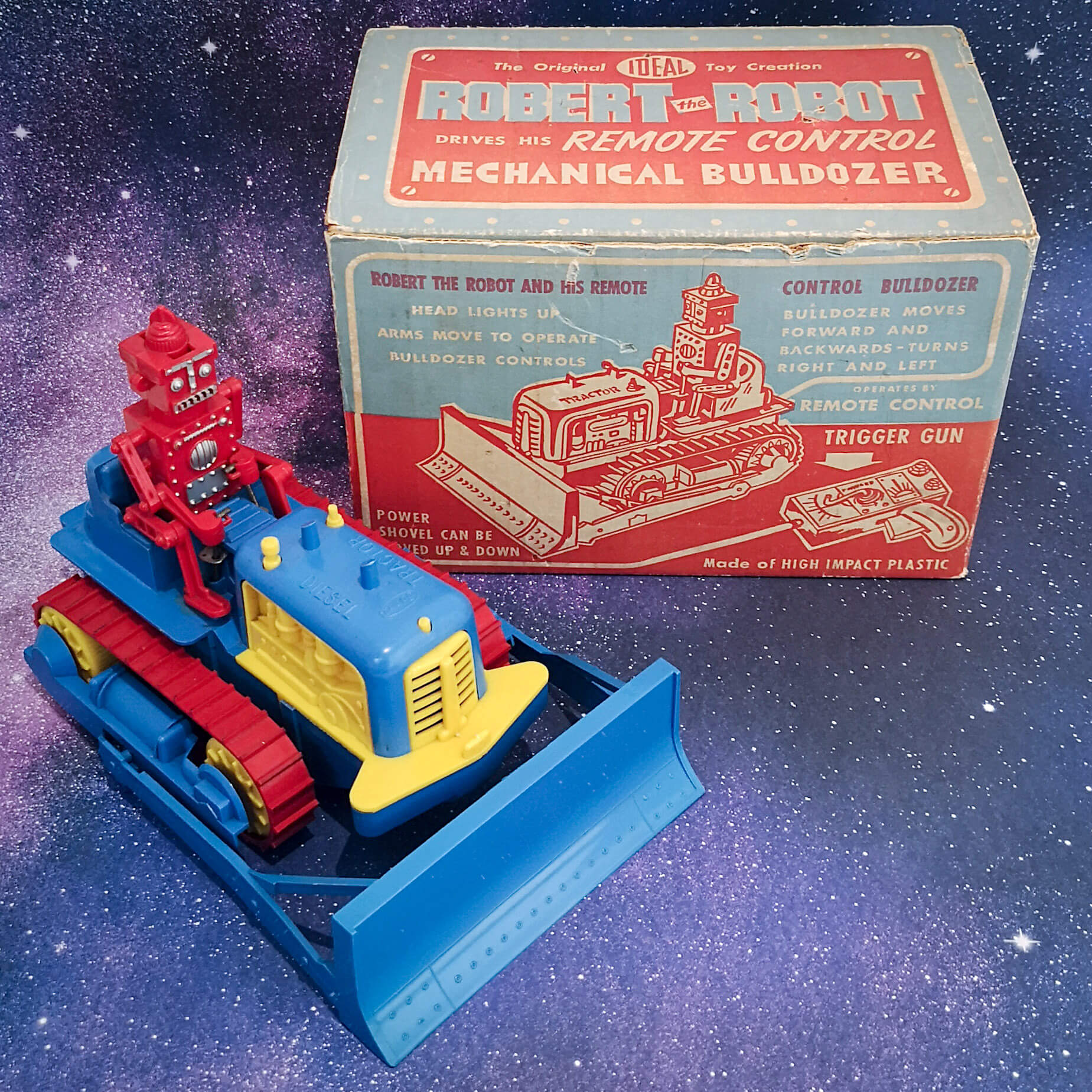 Robert the Robot Bulldozer Tractor. Manufactured by Ideal. Made in the USA c.1956. 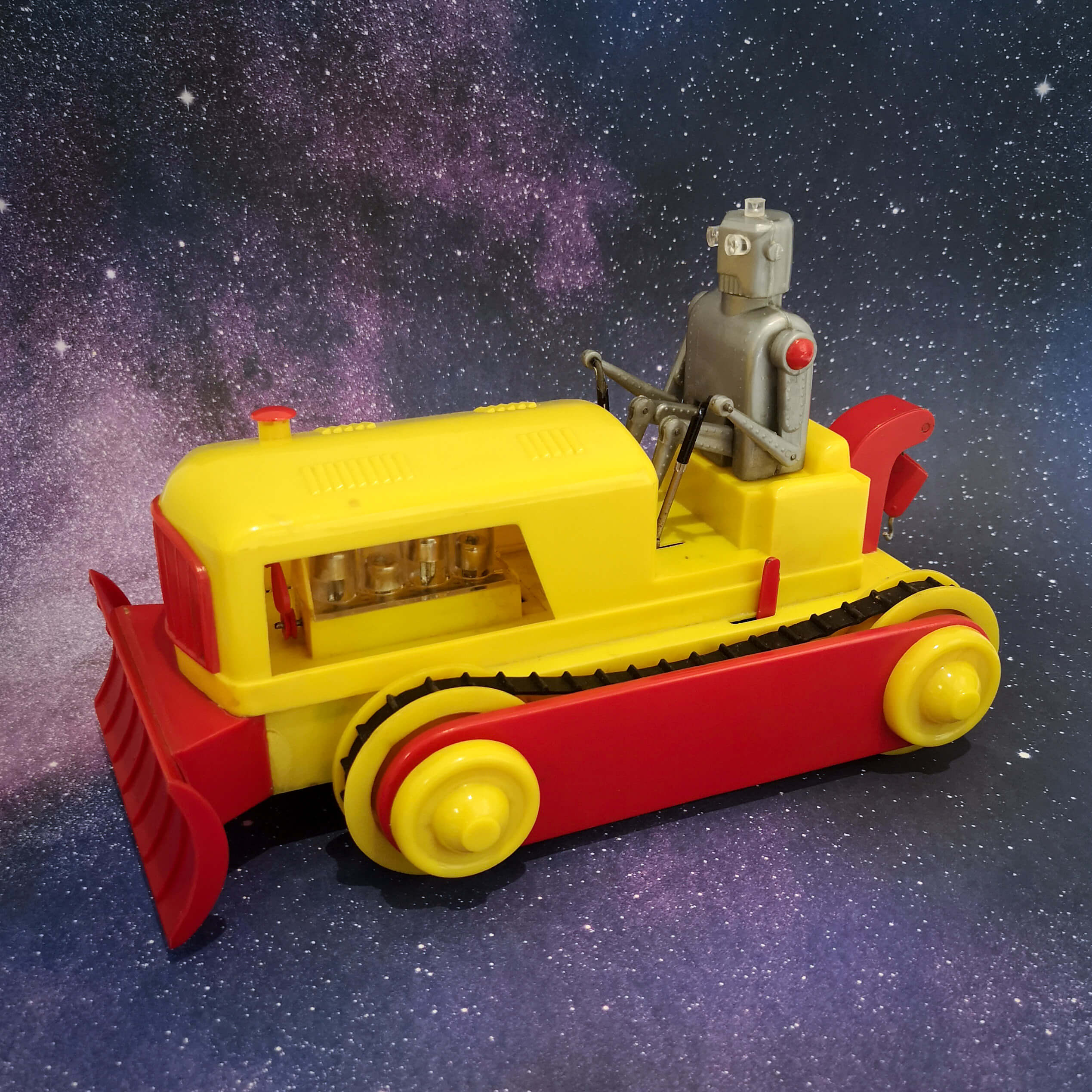 Satellite Launching Truck. Manufactured by Yonezawa. Made in Japan, c. 1958.

Captain Video Spaceships. Manufactured by Lido, licensed by Dumont. Made in USA, c. 1952. 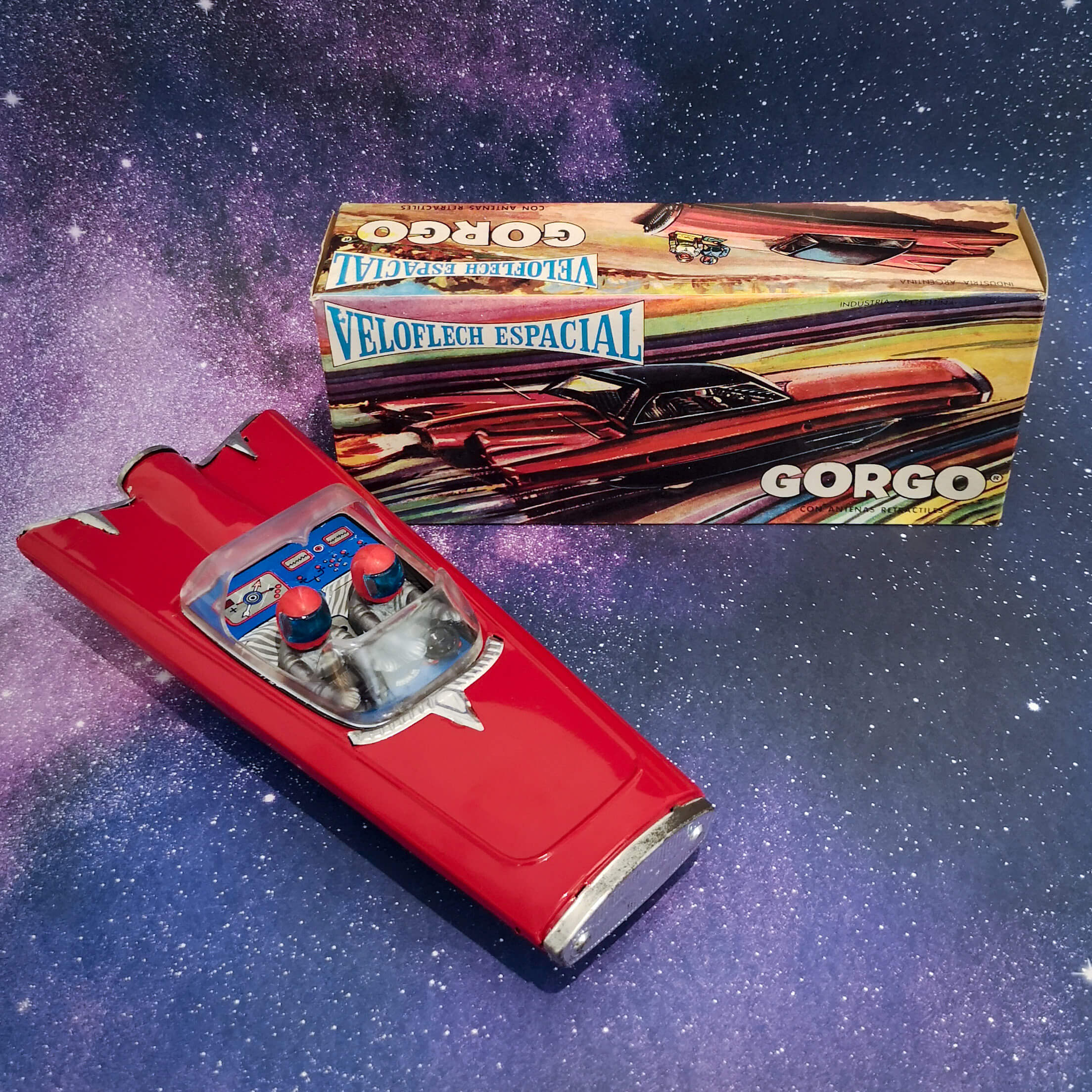 Veloflech Espacial Future Car. Manufactured by Gorgo. Made in Argentina. 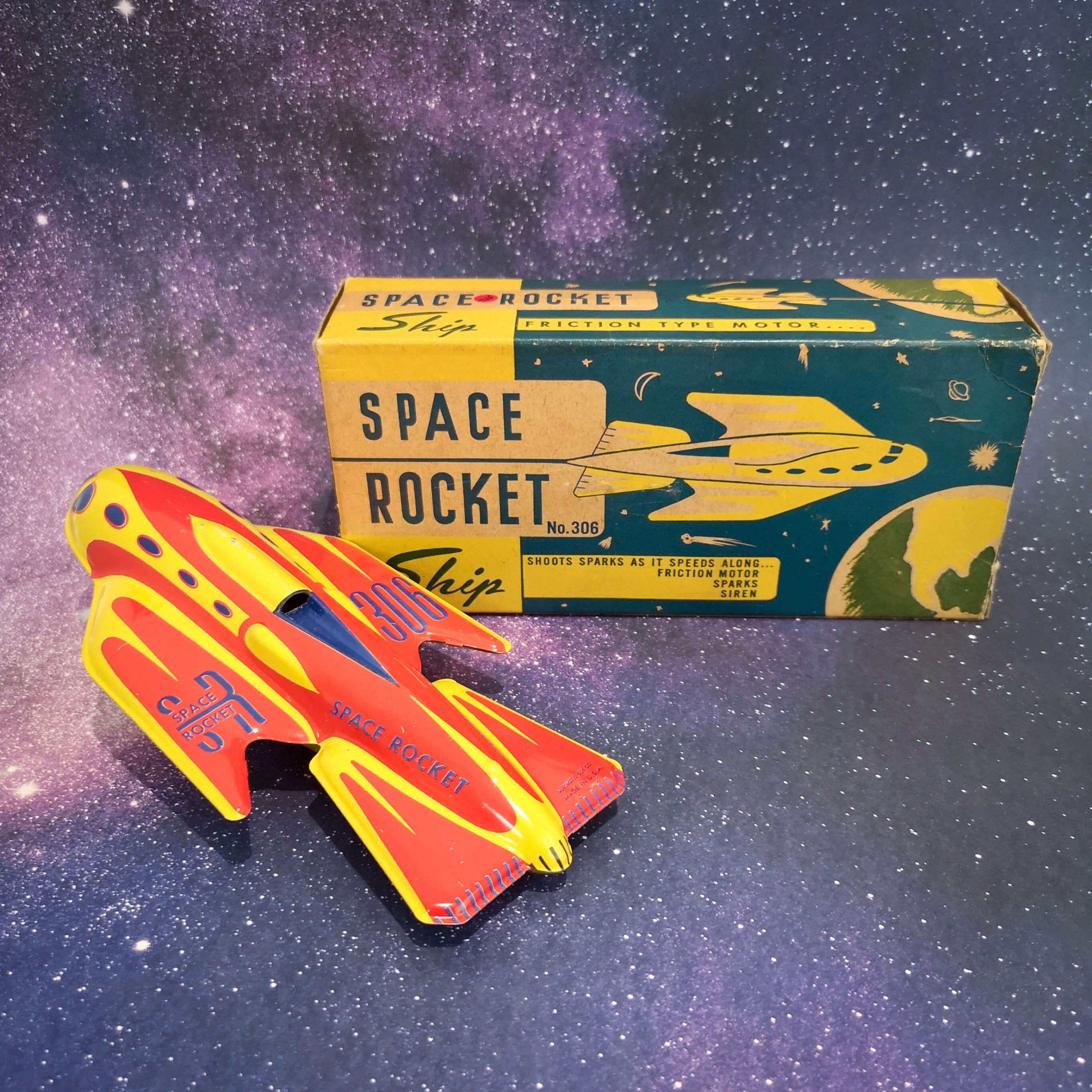 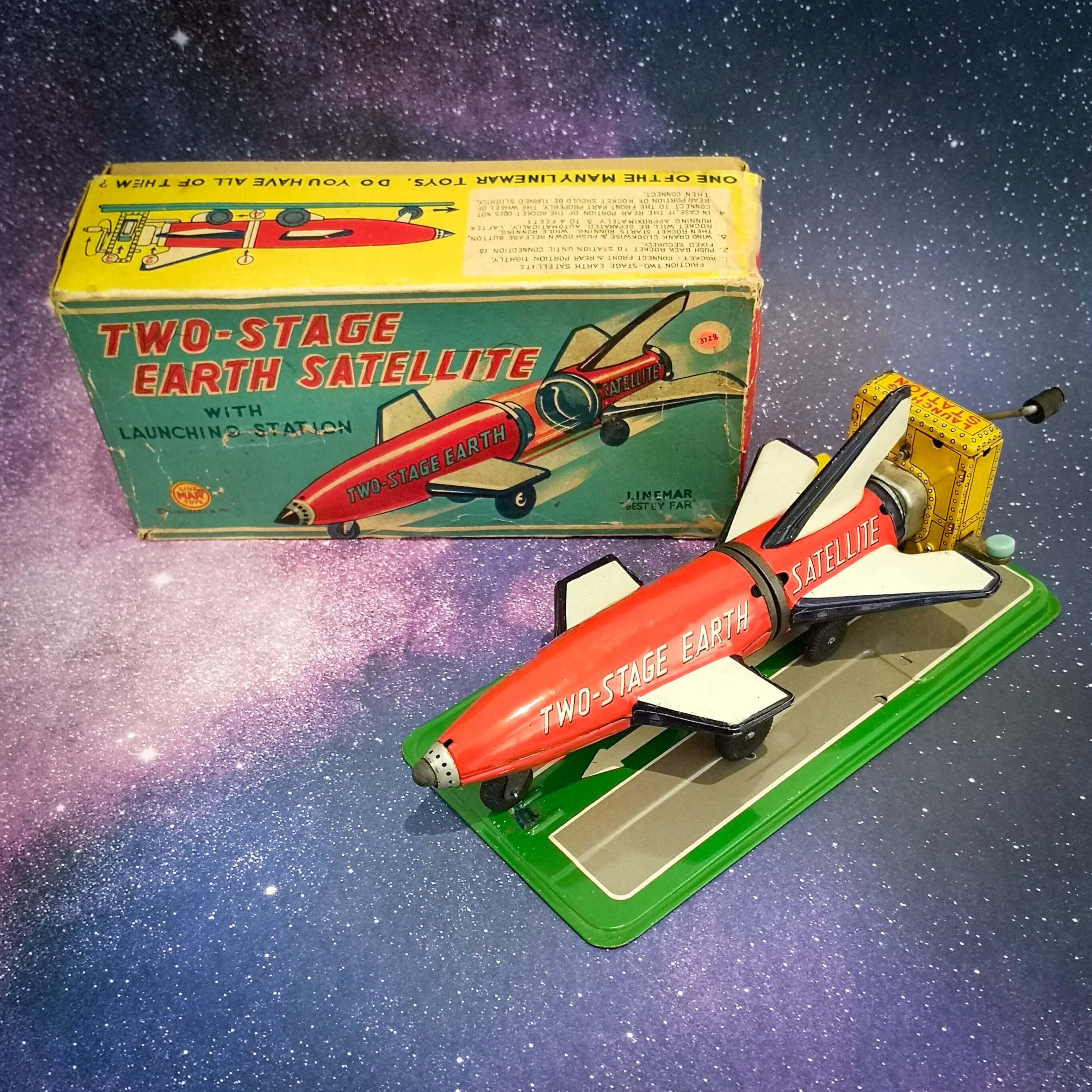 Two-Stage Earth Satellite. Manufactured by Linemar. Made in Japan, c. 1958. 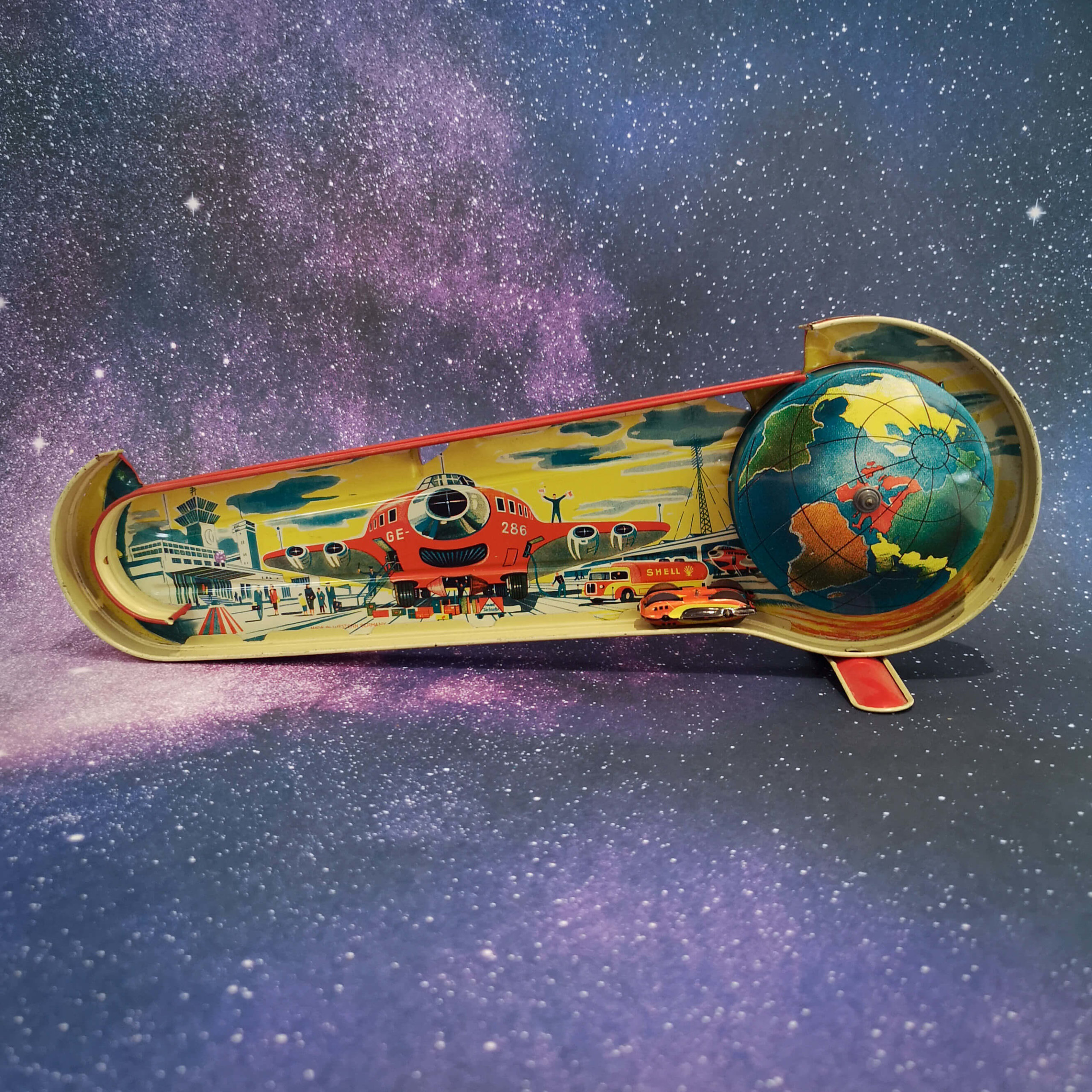 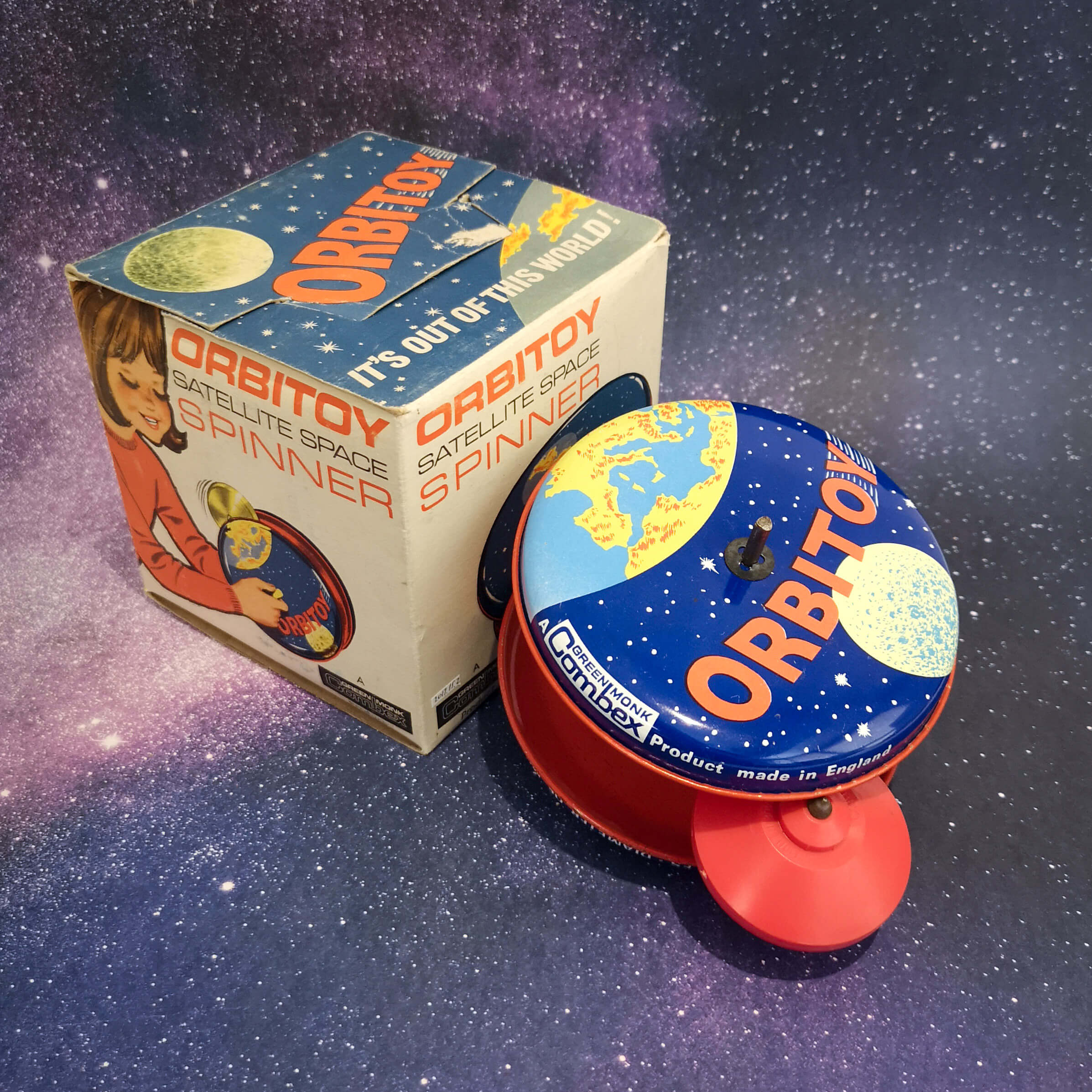 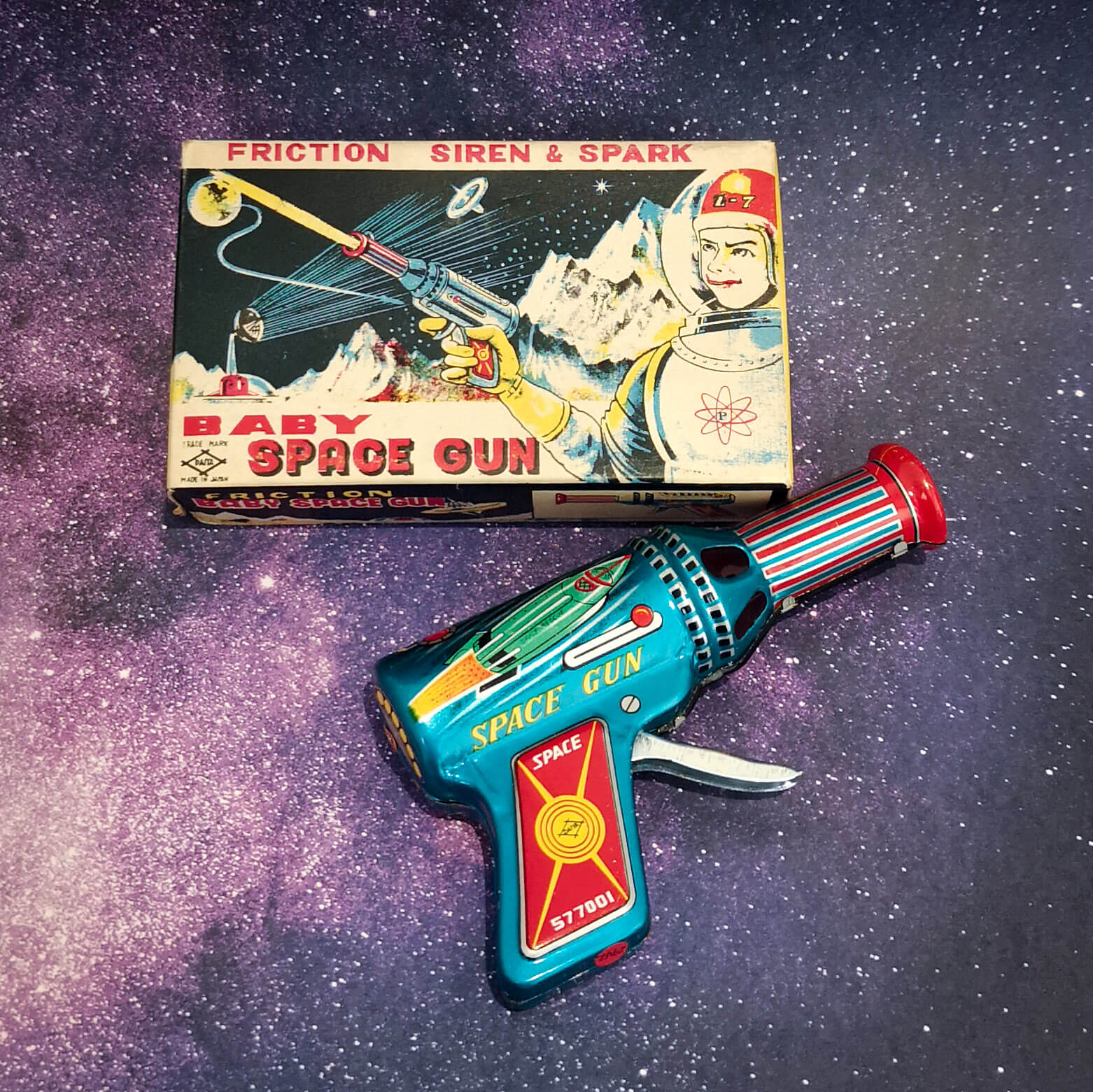 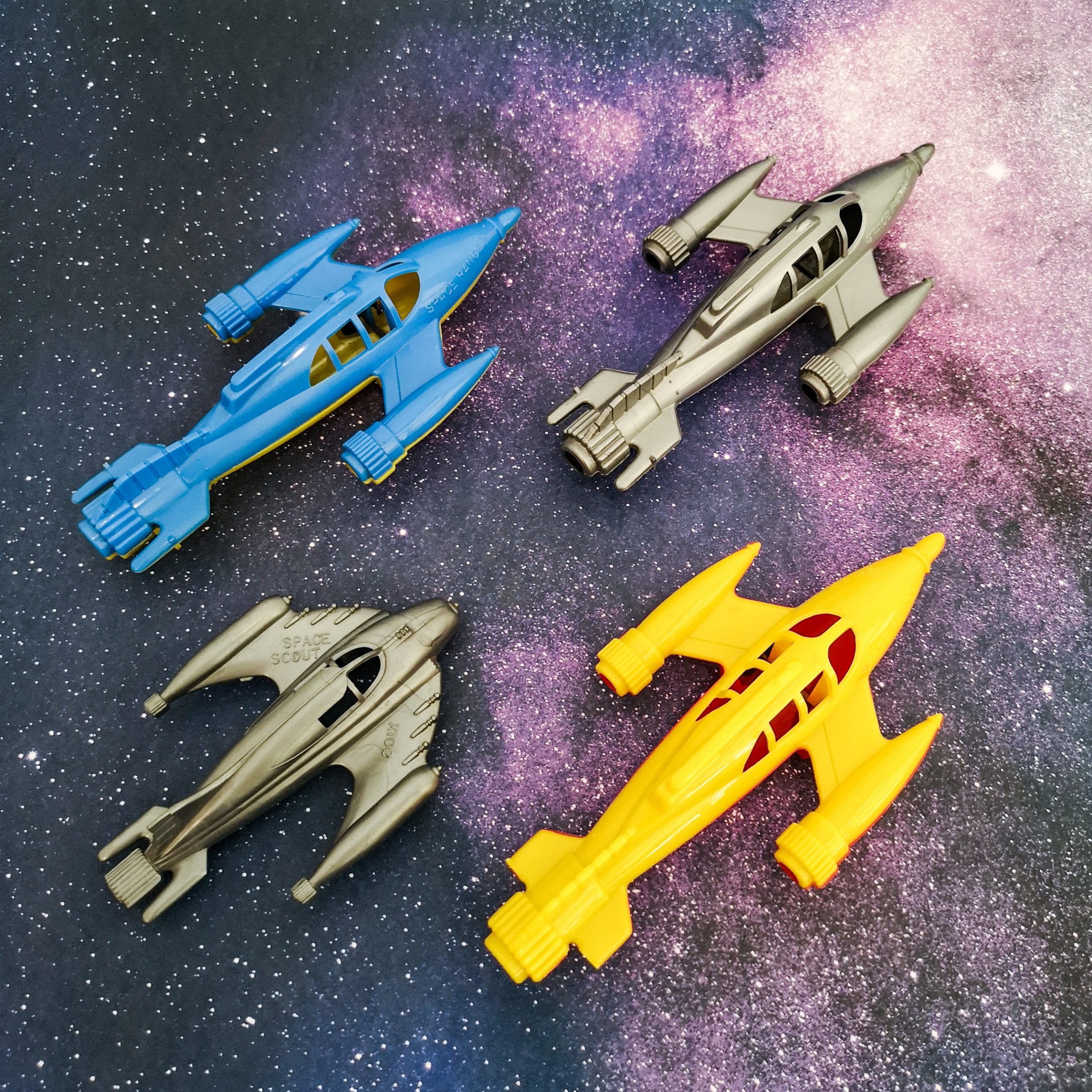 Pyro Spaceships. Manufactured by Pyro. Made in the USA, c. 1950. 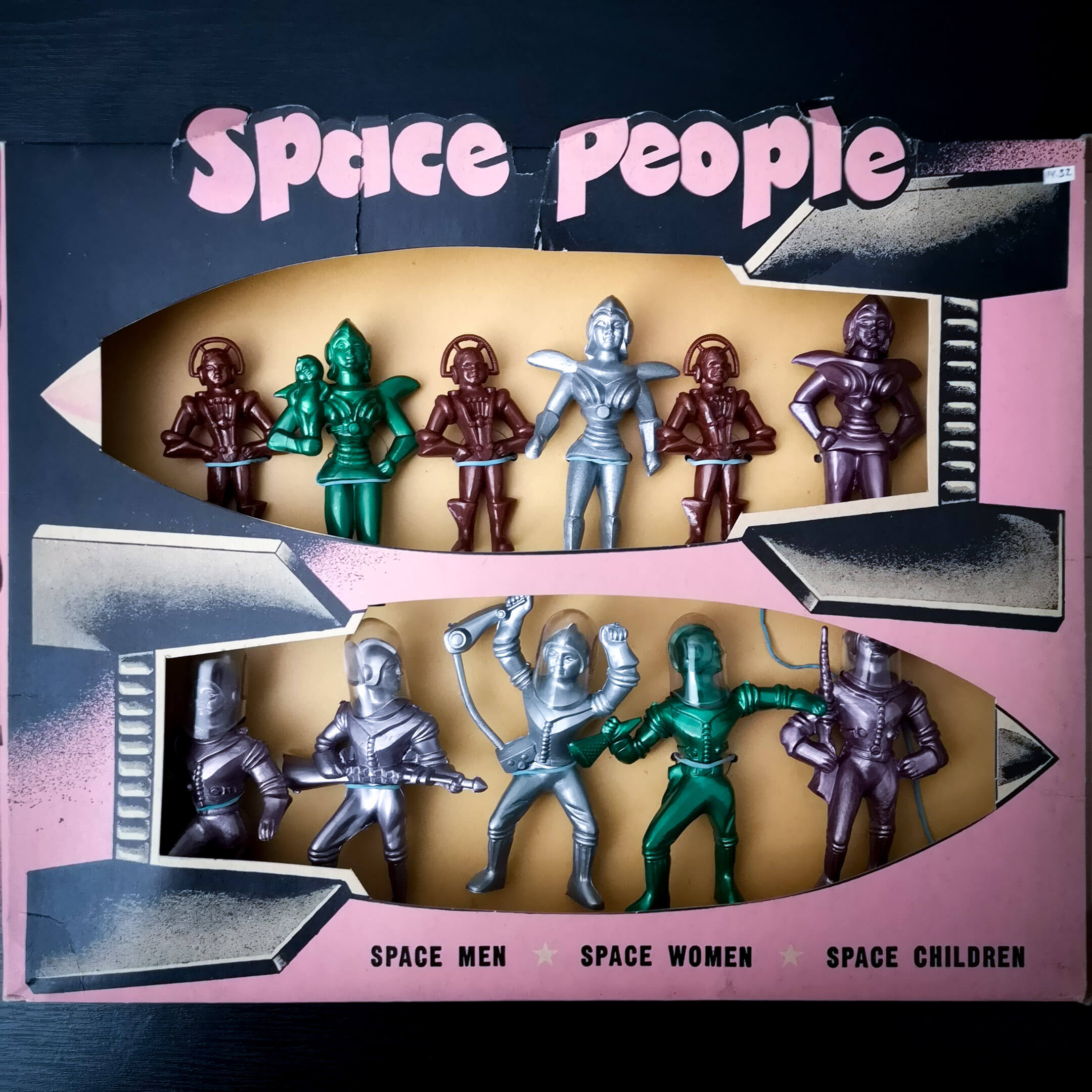 Space People Set. Manufactured by Archer. Made in the USA c.1952