Though soldier figurines have been found in ancient Egyptian tombs, the first ones produced for the purpose of play were tin soldiers made in Europe in the 18th century.

During the following centuries, toy soldiers were also commonly made from lead, wood, and a material called composition, which is a combination of sawdust and glue. In 1938, the Bergen Toy and Novelty Co (Beton) was the first toymaker to make plastic American army men, which – despite their disposability – have now achieved immortal iconic status.

They had WWI era uniforms and were molded in olive green plastic. They were made from Tenite, a cellulose acetate obtained from Eastman Chemical.  When The United States entered WWII only one year later, Beton was able to get a leg-up on their competitors who produced lead toy soldiers. With wartime restrictions, it became almost impossible to manufacture metal toys, yet Beton continued to manufacture their army men with plastic scraps. After the war their molds were updated to reflect WWII style uniforms and helmets.

The post-war plastics boom brought other manufacturers into the plastic toy soldier market, including Marx, Lido, Pyro, Archer and others.  Polystyrenes became the plastic of choice for these figures, and was later replaced by polyethylene around 1953, as it was a softer plastic and easier to mold. The typically green men also came in different colors to represent enemy forces, such as grey for German. Over the years they were updated to reflect contemporary uniform styles and weapons, though the WWII style remained a classic. Naturally, these little plastic battalions needed to get around, and a variety of army green plastic tanks, trucks, and other military vehicles enjoyed popularity alongside the soldiers.

The increased awareness of lead poisoning also made these plastic army men much more appealing to parents than the lead soldiers that had been popularized by the W. Britain company.  Furthermore, the plastic army men were cheaper and more durable. They could be thrown around in daring feats of valor and come out unscathed in ways that their metal counterparts couldn’t.  And even when they were wounded in the line of duty, their inexpensiveness made them easier to replace. Competition between companies lead to the soldiers being sold in bulk packages, for low prices.

In the 1960s, demand for military toys and army men waned as public opposition to the Vietnam war grew along with general anti-war sentiment.  The little green men regained their status in the 1980s and ’90s, however, even landing a supporting role in Pixar’s 1995 blockbuster “Toy Story.” And in 2011, they made it onto Time Magazine’s list of the 100 greatest toys of all time.  To show our appreciation for these valiant classic toys (and for our customers!), select vintage army men and military toys in our online shop are now up to $15 off – no code required. 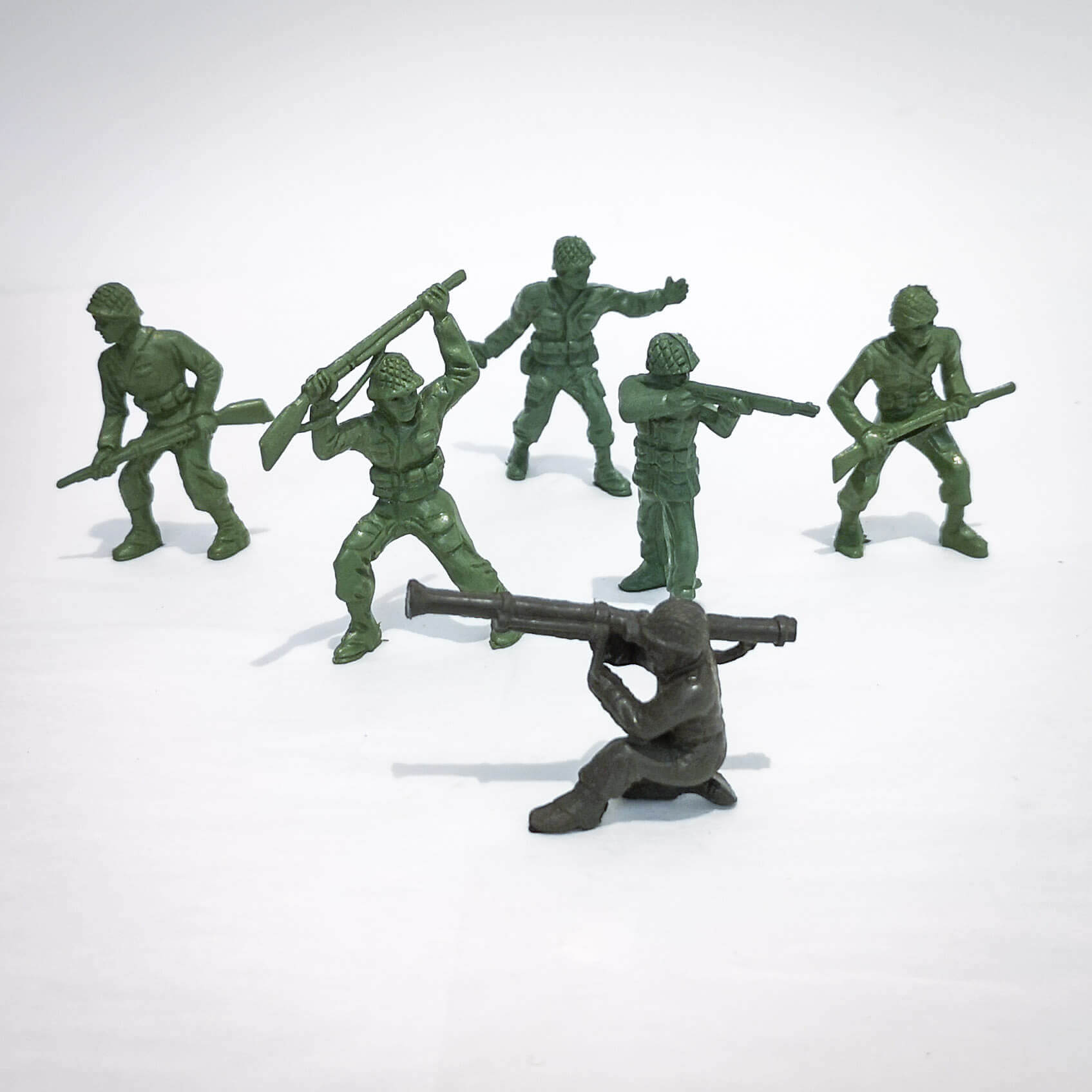 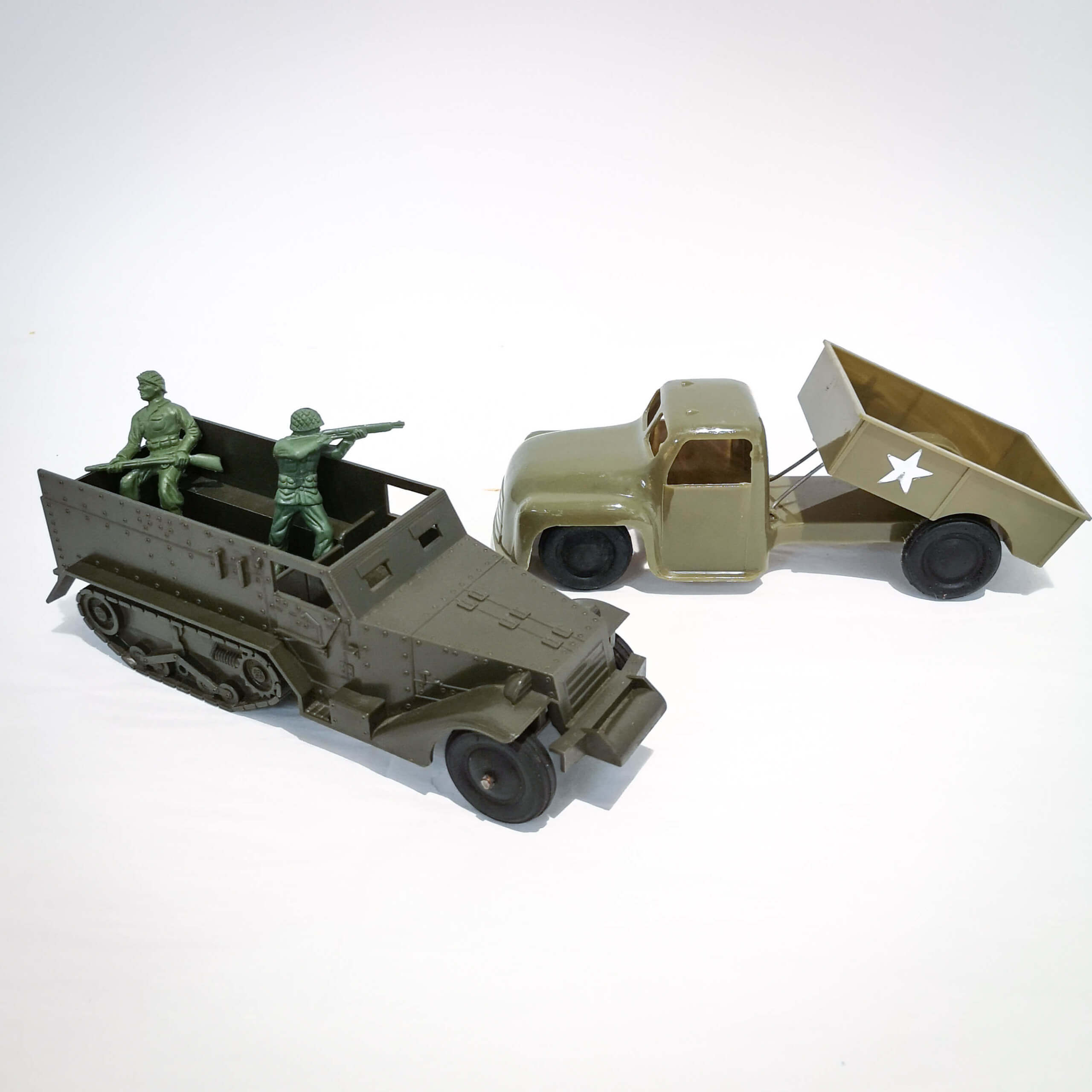 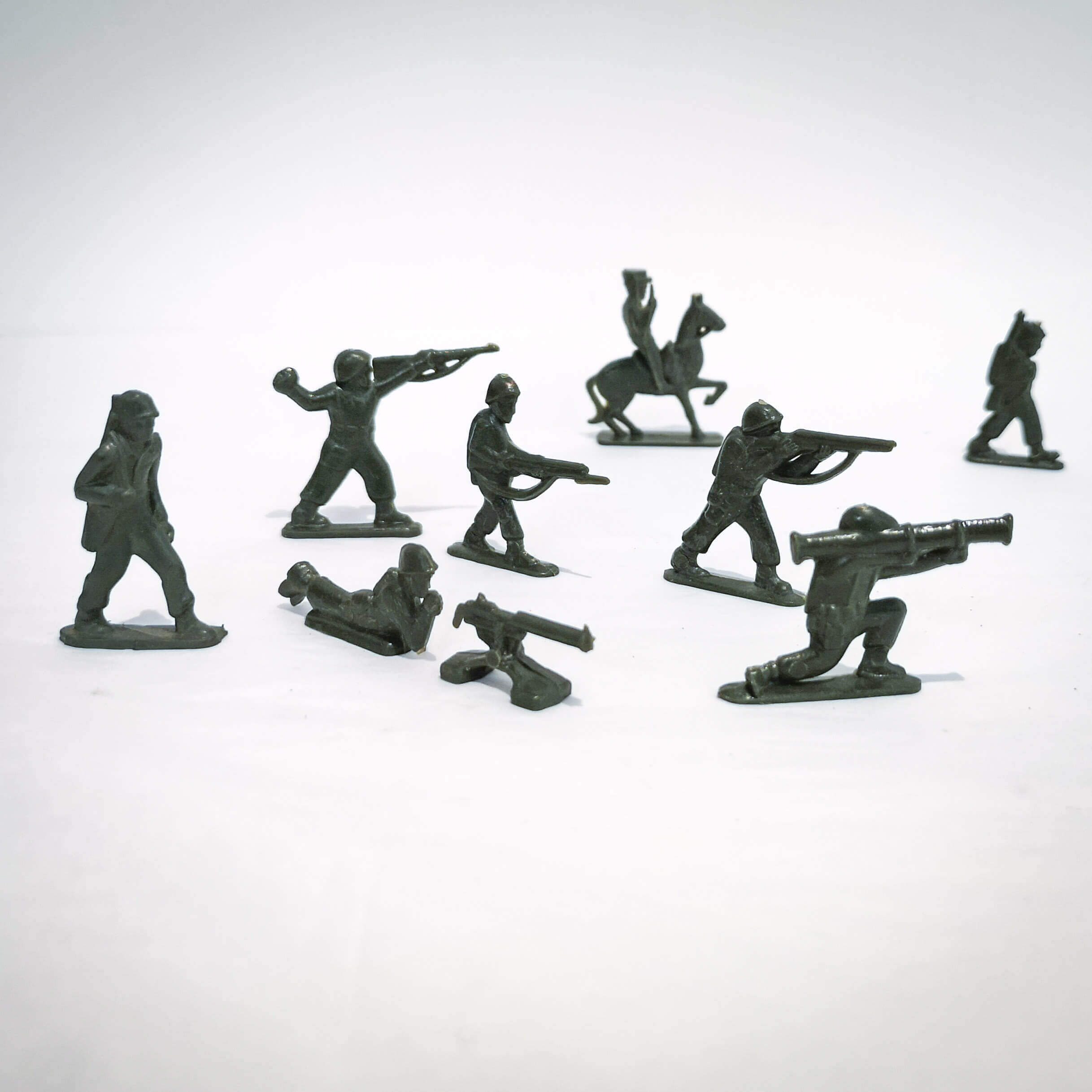 Kilty miniature plastic toy soldiers. Made in the USA c.1950 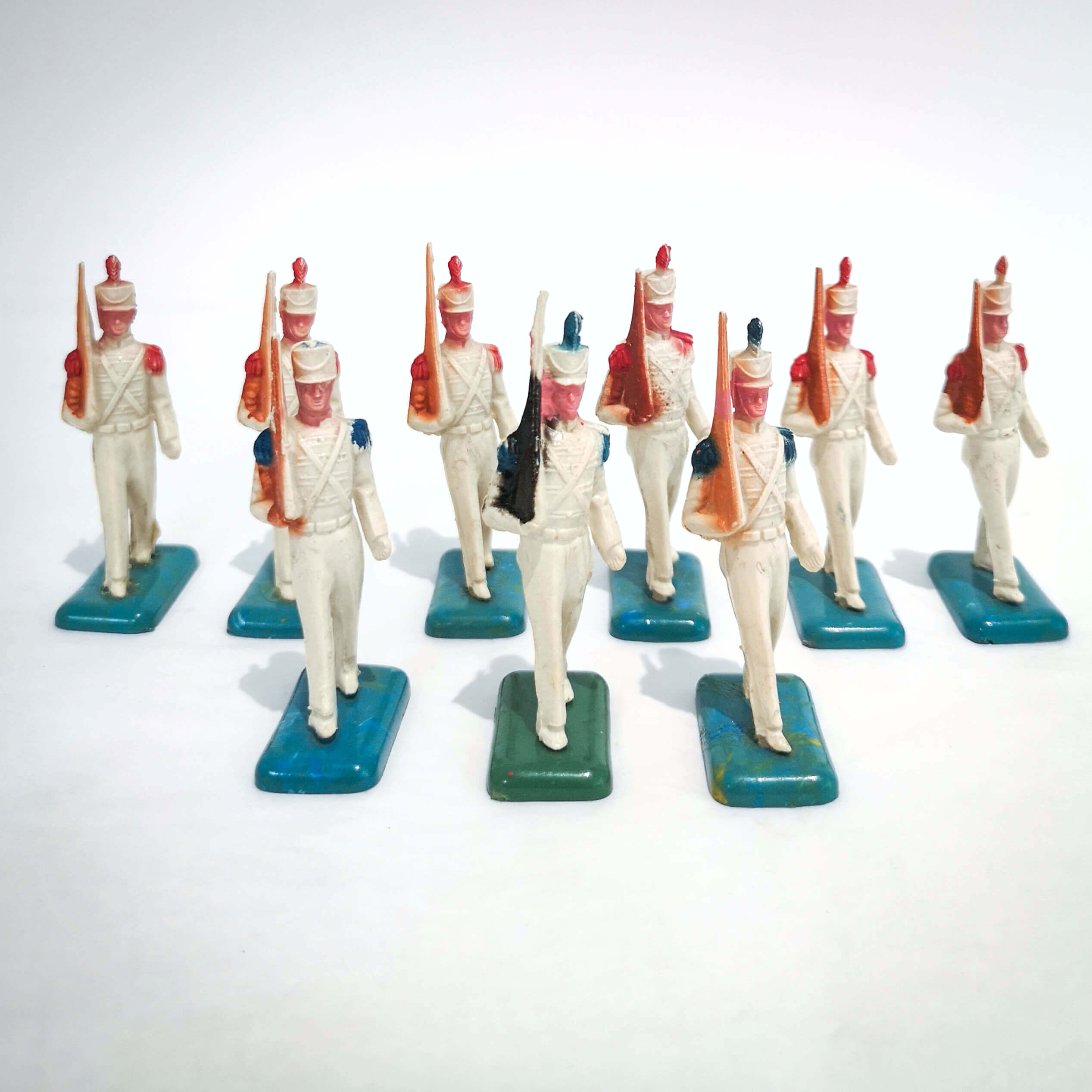 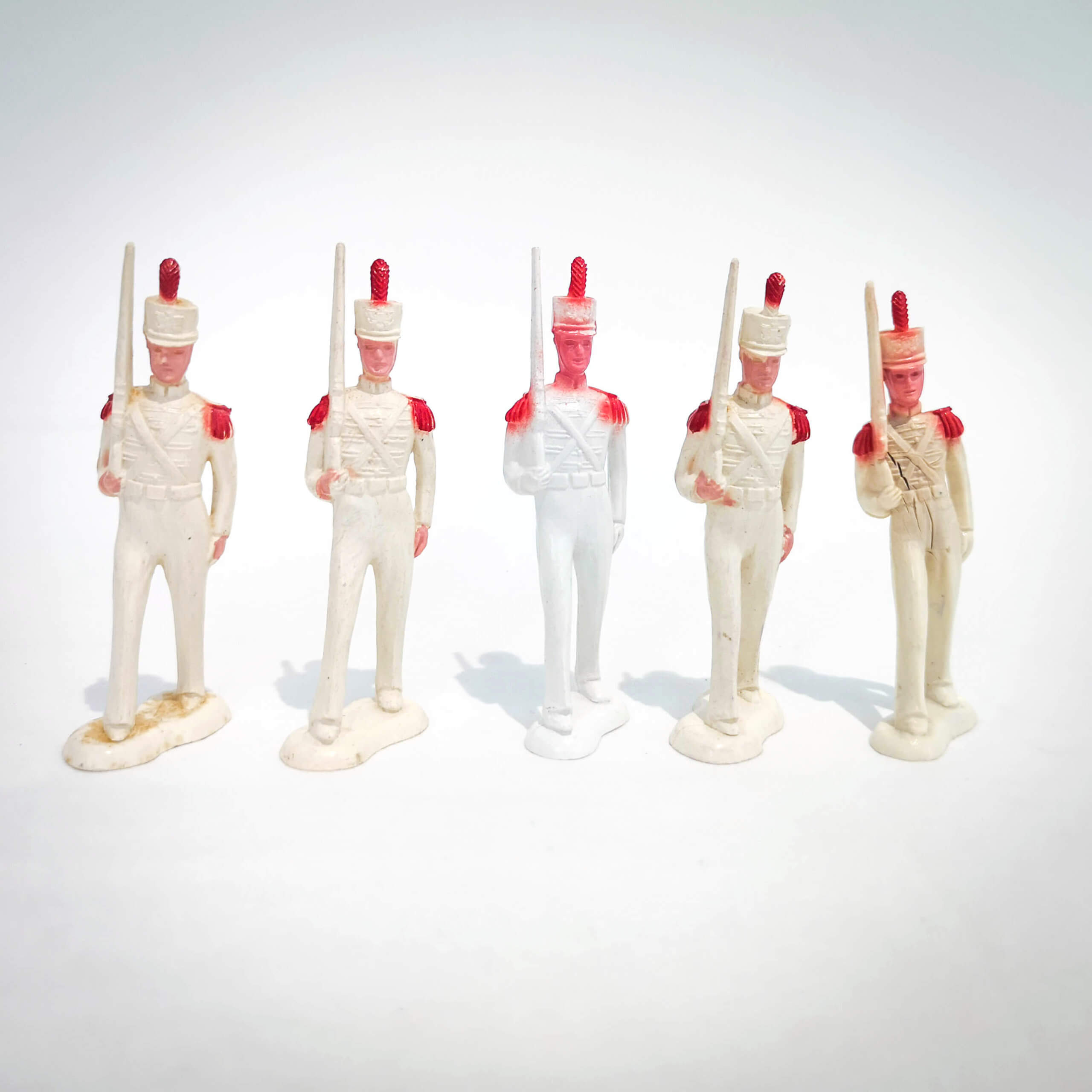 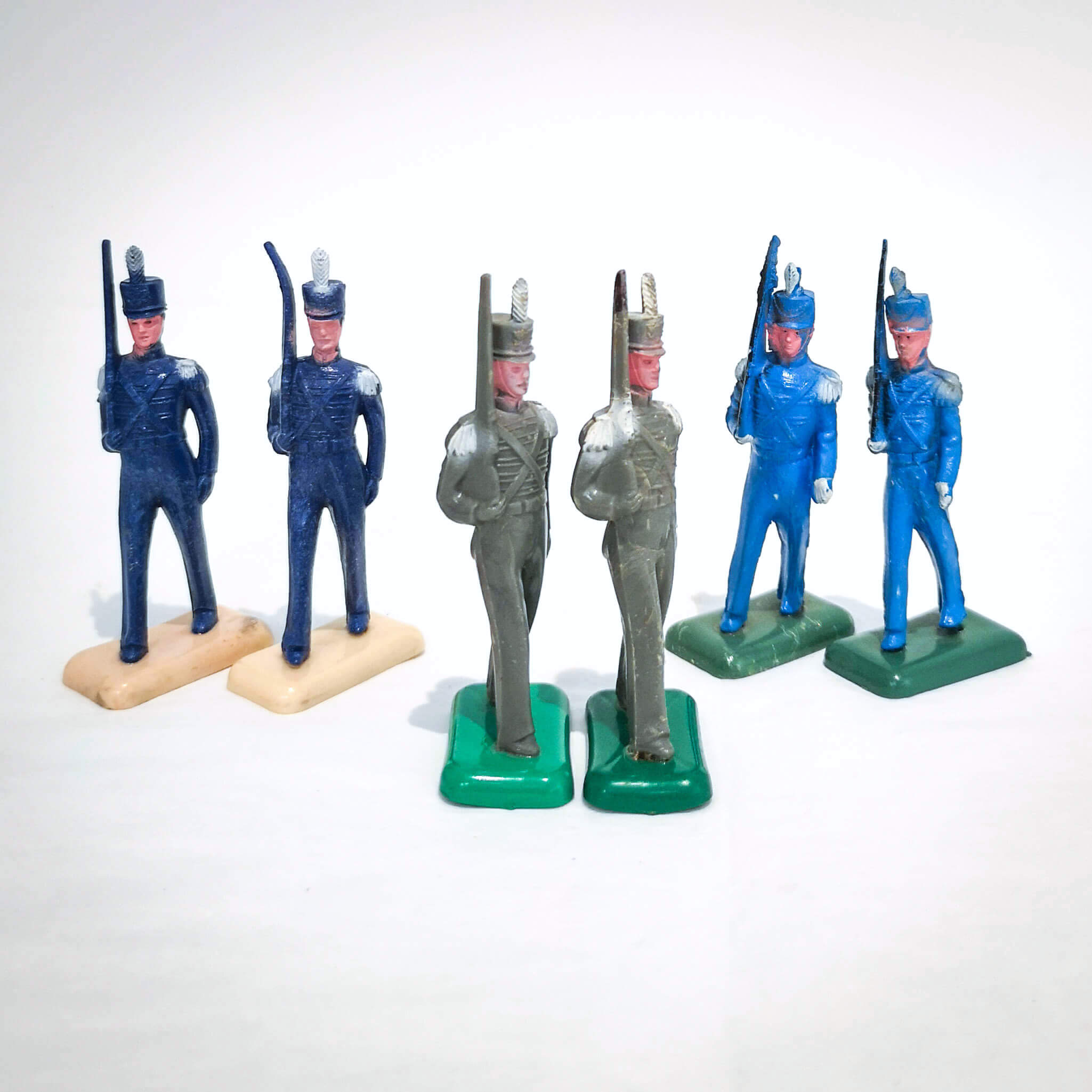 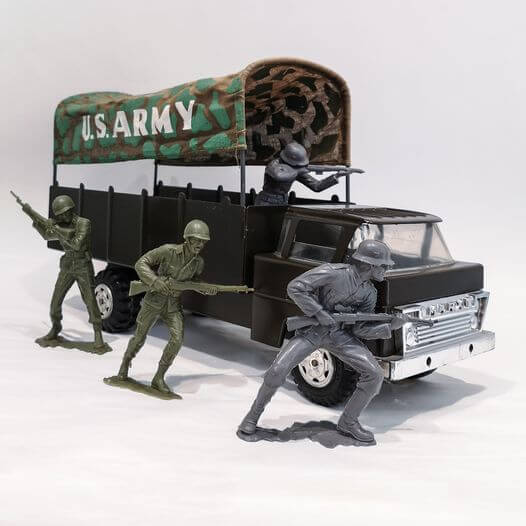 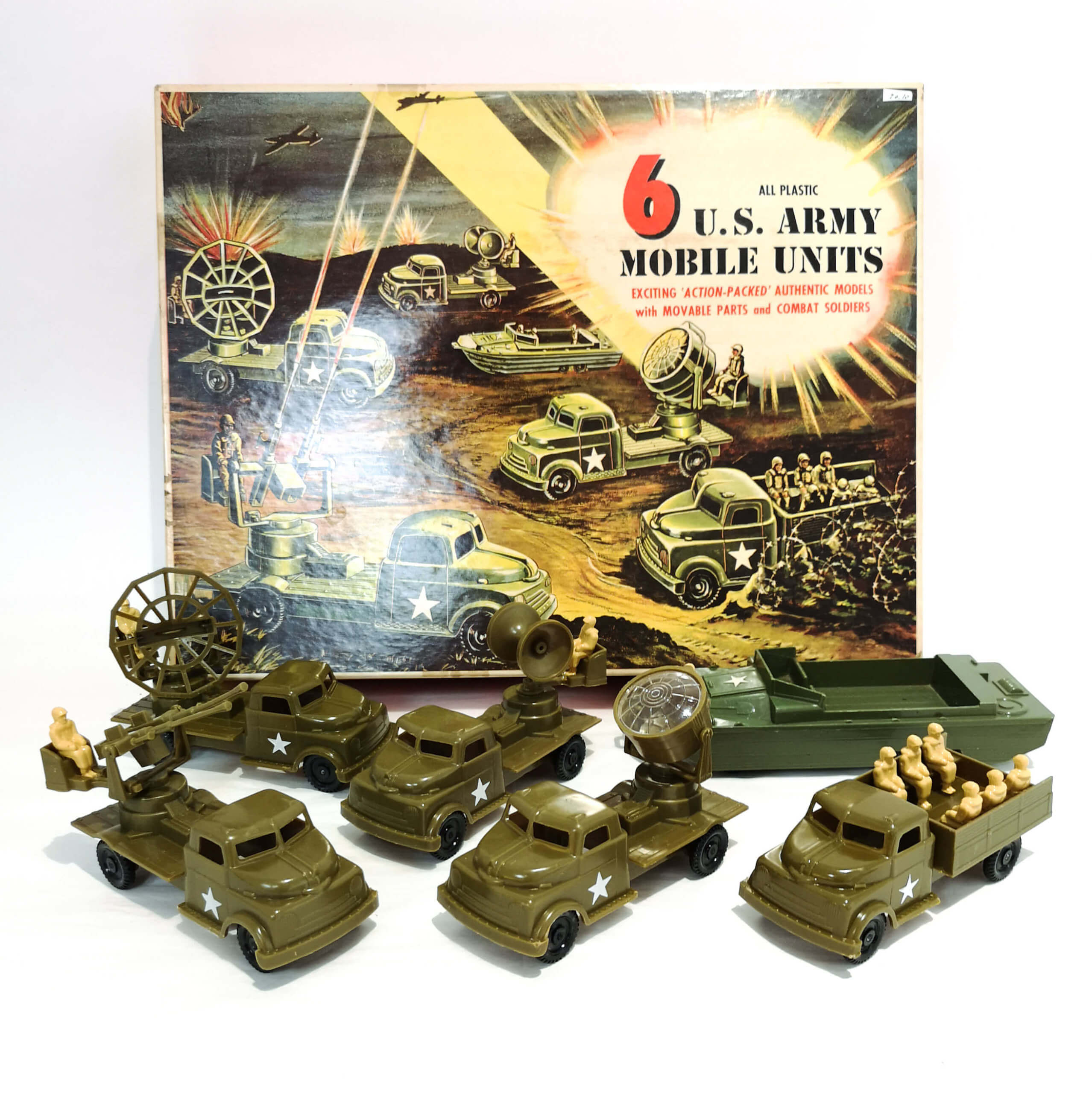 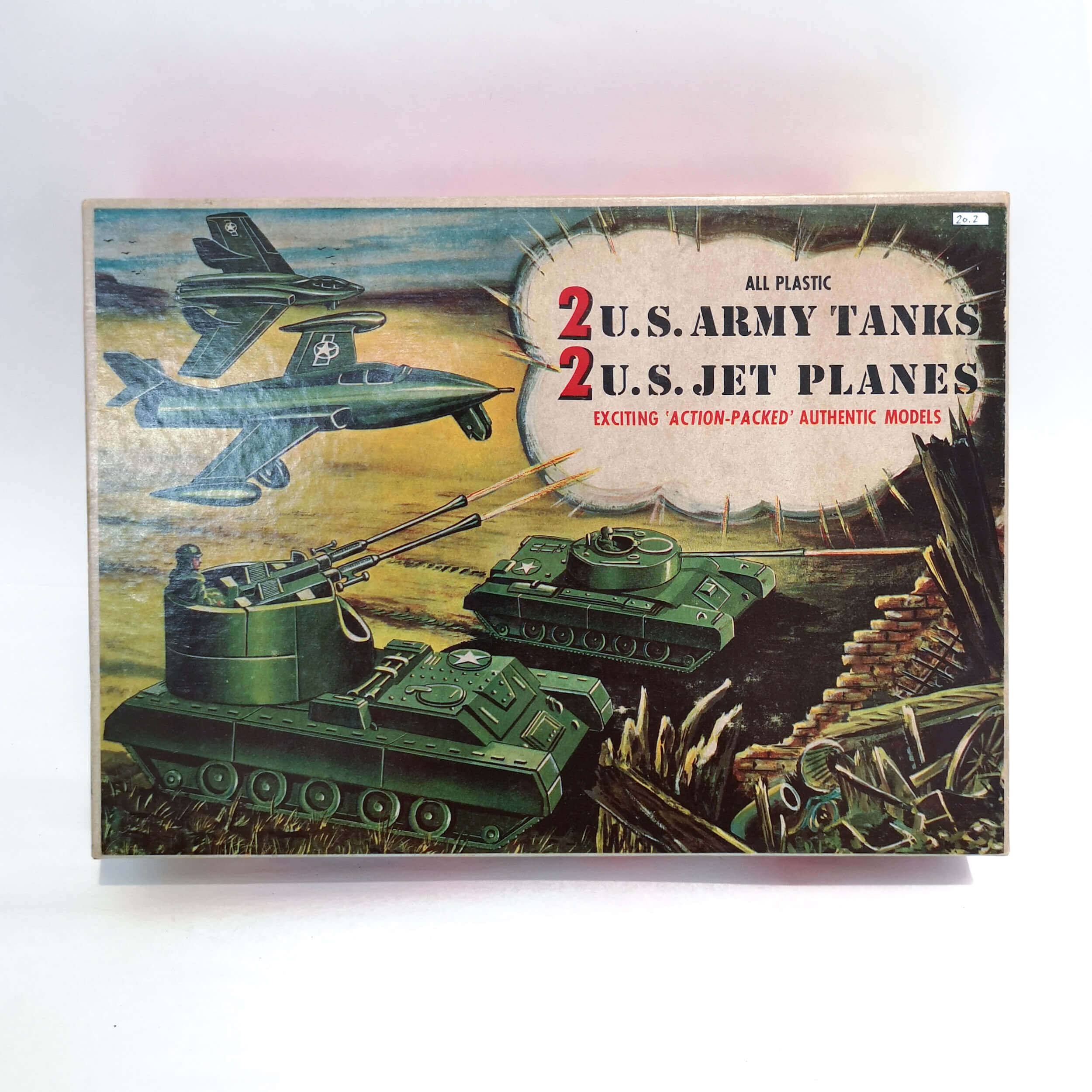 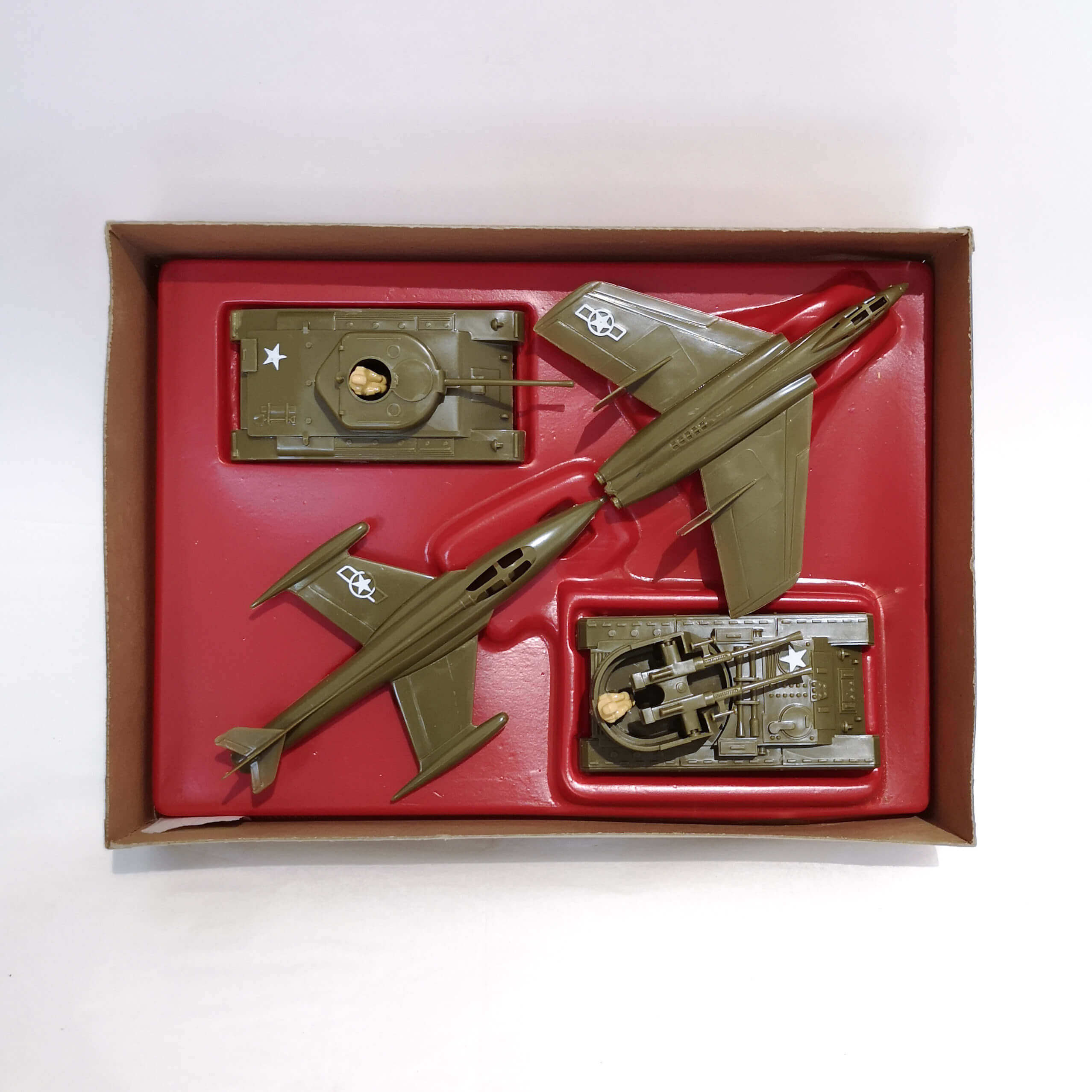 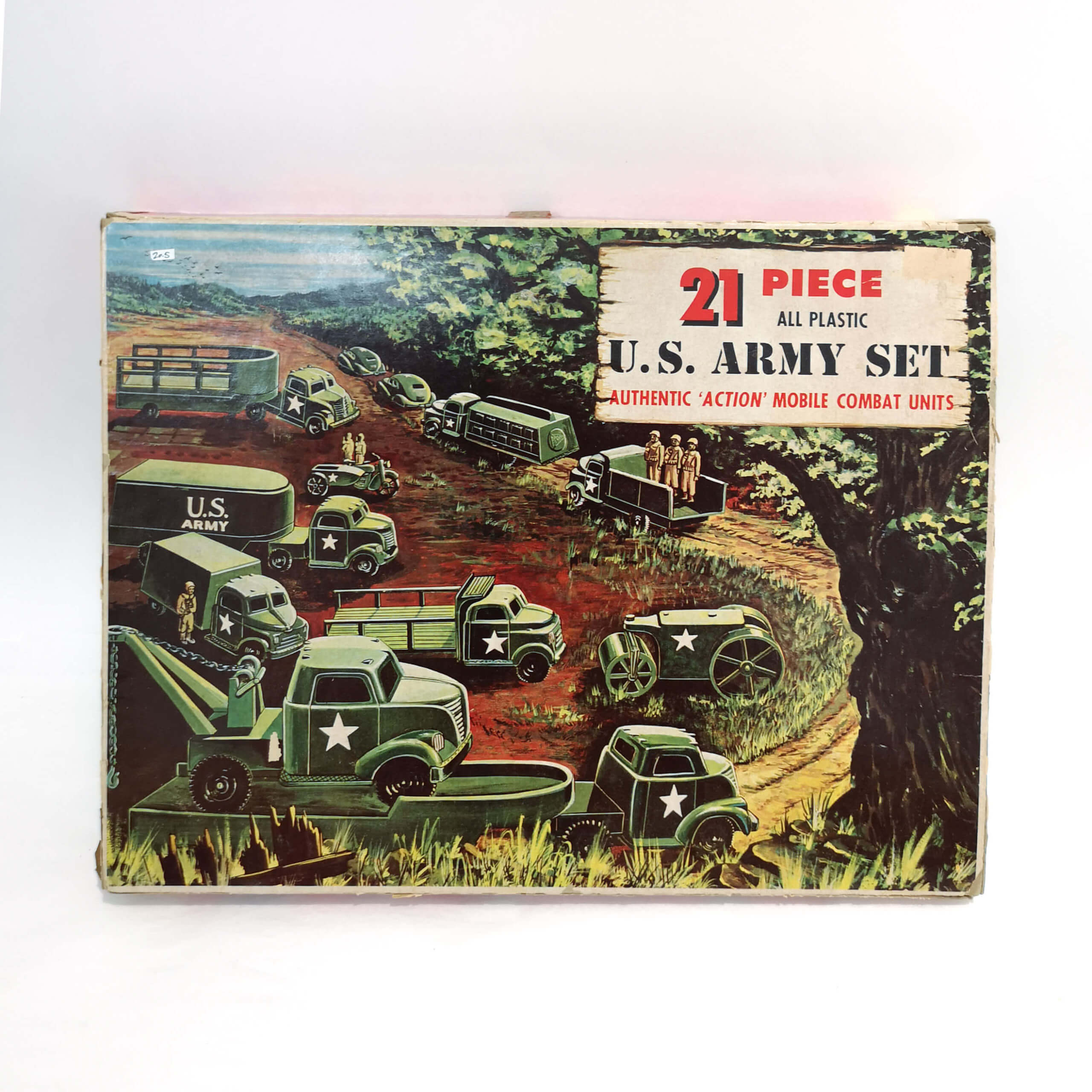 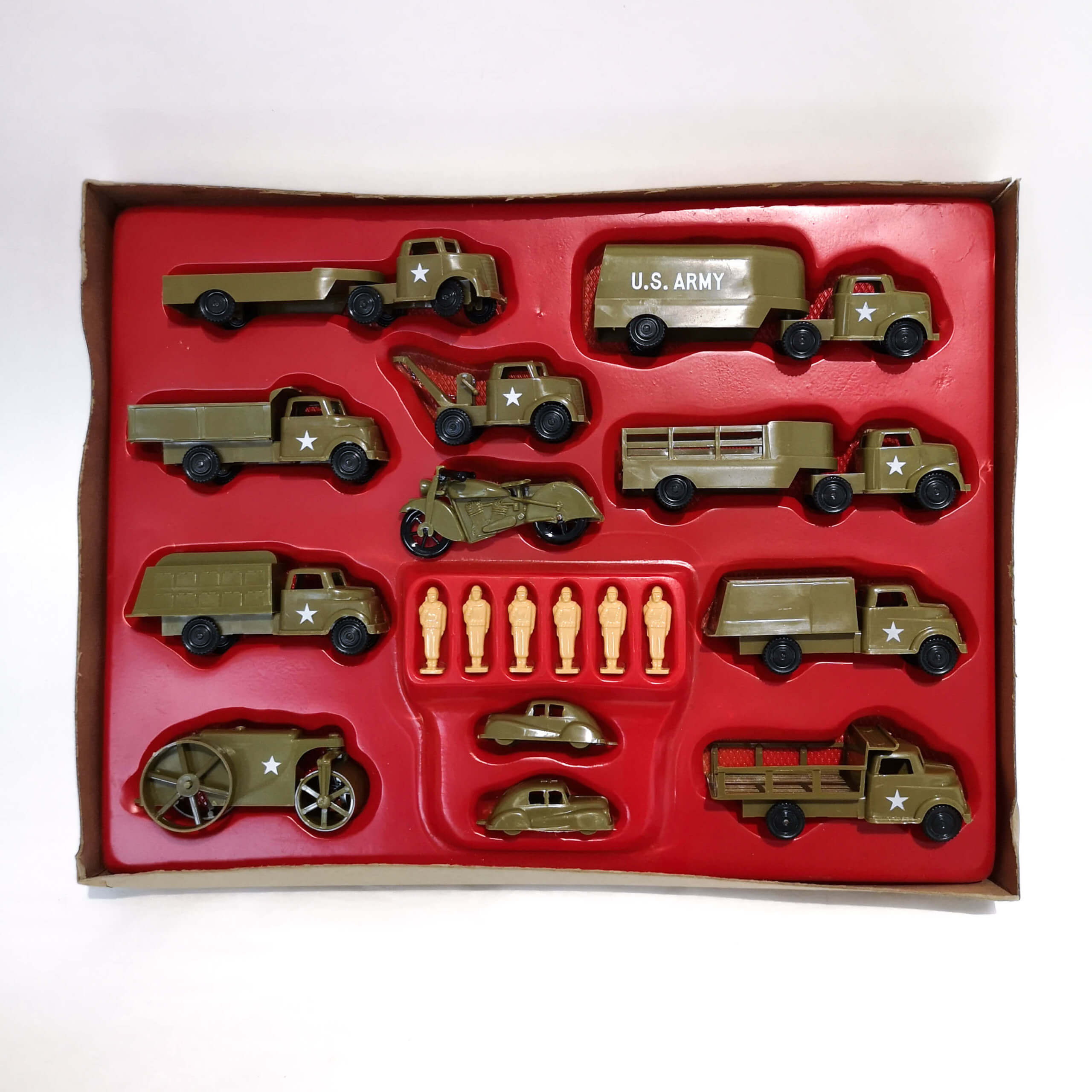